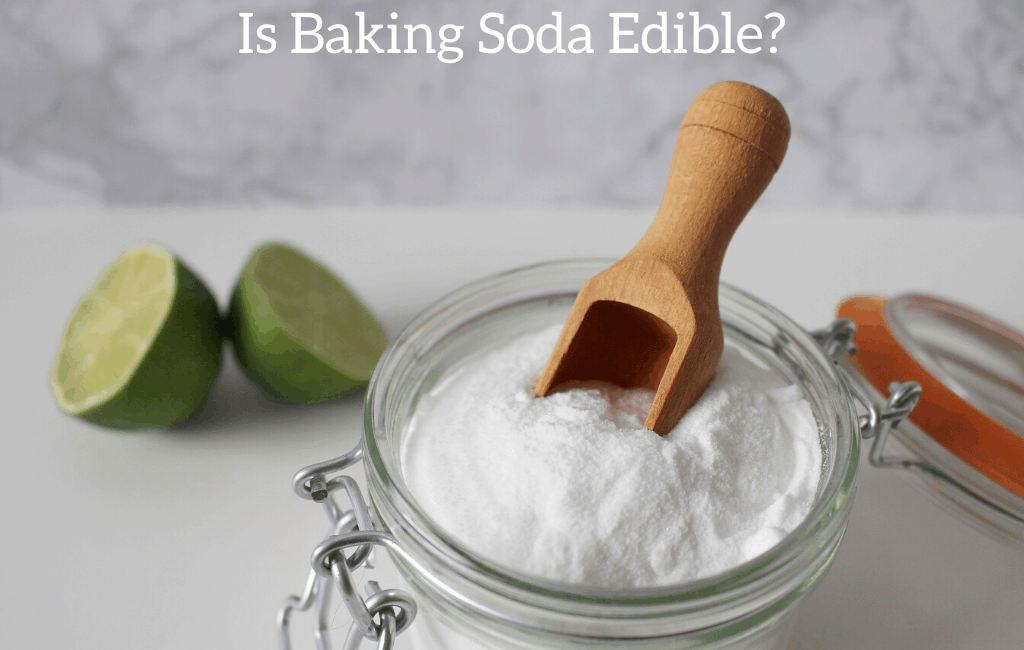 Baking soda is a common ingredient that is found in various baked goods. In fact, even when you decide to bake a dish you love, you normally cannot leave out baking soda.

Also known by its chemical name ‘’sodium bicarbonate’’, this is a light ‘’leavening agent’’ that can make your food fluffier. It is generally said that consuming sodium bicarbonate in moderate amounts is not at all harmful for your health.

In fact, baking soda is said to have dozens of uses, apart from baking. If carefully analyzed, this mild ingredient can help to raise your baked items, in a way that delivers the exact flavor profile that you want.

But what are the most immediate results of consuming too much baking soda? Let’s find out!

So is baking soda edible?

Baking soda is edible although eating baking soda with a spoon is not recommended! The downside of eating baking soda comes when you consume too much baking soda and it hurts your stomach. That is why you should always follow the recipe and use the correct amount in the food you are making.

Baking soda is said to have various properties that can automatically cater to the needs of the baking industry. The culinary world cannot do without this ingredient, for the simple reason that it helps the food soften, with stiff peaks, giving it a better output.

In short, if both baking soda and baking powder are combined together, the result of baking is absolutely perfect. On the other hand, there are some careful recommendations regarding the edible factor of baking soda.

Since it is of a mild nature, sodium bicarbonate should not be consumed in large amounts. Unlike baking powder, baking soda is something that can cause inhalation and stomach issues, if proper steps are not followed when using it. Hence, when using baking soda, always check the quantity that the recipe tells you to use.

Using three to four tablespoons can ultimately cause your cake to be bitter. Therefore, you need to ensure that the amount of baking soda you are putting onto your food is exactly enough and never too much!

How do you distinguish baking soda from baking powder?

Using the wrong product is the most common mistake that can totally ruin your baking elements. Therefore, individuals should know the actual difference between baking soda and baking powder. The parameters of differences are as follows:

The interesting fact is that although both these substances have different usages and properties, both of them are derived from the common mineral known as Trona. But, the actual difference lies in their process of crystallization, which makes baking soda lighter and abrasive, while baking powder is harsher.

When can the edible factor of baking soda turn poisonous?

This leavening agent can be pretty good for your baking if proper instructions of usage are kept in mind. Mixing baking soda with water, can produce ample benefits, and may be used in cooking as well. But how do you figure out if the baking soda you are using is not edible?

According to several nutritionists, and baking experts, baking soda is an important element. But excessive usage can practically damage the food that you are cooking, and cause immense trouble. Appropriate usage of soda bicarbonate is always recommended, even by food critics. But its poisonous effects should not be dismissed at all either.

Therefore, baking soda can turn highly alkaline, if used more in one dish, leading to an increased amount of toxicity. The toxins can be mixed with the food, thereby making you fall ill quickly. Some of the major causes of extreme consumption of baking soda can lead to the following:

Apart from the above, the common symptoms that will plague you instantly are as follows:

These changes can start suddenly, if you are not careful with your measurements. Now that you are aware of the side-effects of consuming too much baking soda, the edibility factor should be reduced to the bare minimum.

Baking soda contains at least 8.741g of sodium, in just one tablespoon of it. This sodium helps in lightening and further enhancing the dish to its ultimate taste. Even if you forget to use baking soda, the dish would turn out to be mildly light.

The acid content of baking soda differs with the quality as well. Likely, some foods require slightly higher amounts of baking soda, while others require less. Keeping in mind the quantity, make sure that your measurement is appropriate! And as always…Have Fun!!!