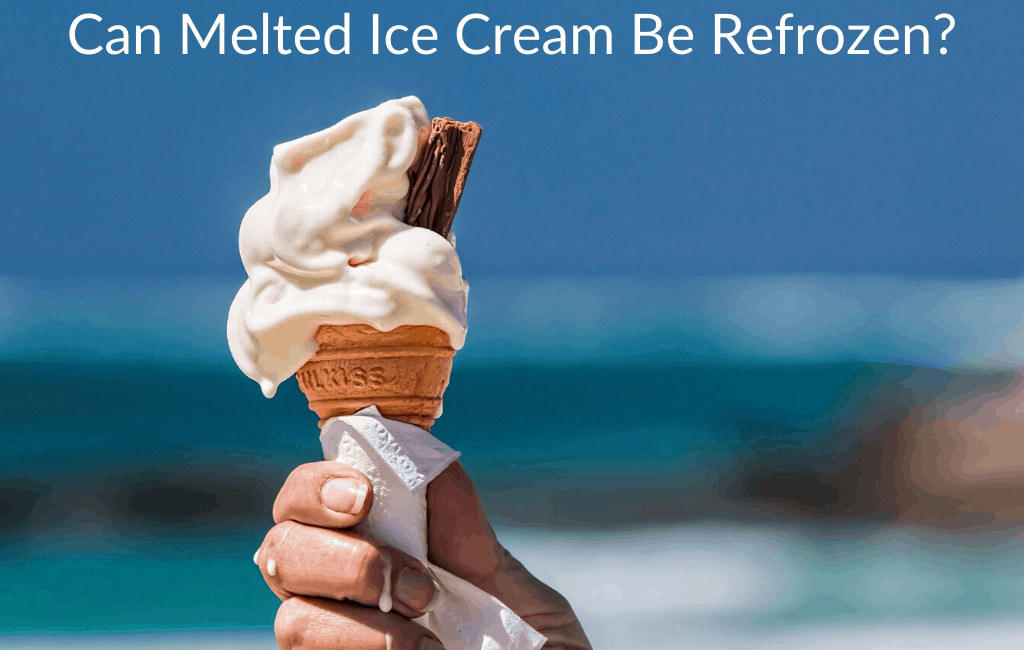 It is a known fact that everyone loves ice cream, particularly in summertime. This is because of the cooling effect ice cream provides to the person eating it. Also, ice cream comes in different flavors, which helps to keep different types of people interested. Due to excessive heat in the environment, the ice cream may melt into a liquid form.

While some people do like to have such melted ice cream, others do not like their ice cream melted. The second category of people wants the ice cream to be refrozen. This is because they believe that ice cream tastes best in frozen form.

The solid form of the ice cream is the best thing as compared to the liquid form for some people. So, the question that arises is – should we refreeze the ice cream, which has melted to obtain the solid form. This is an important question because it must be answered by the science involved in the background. This science will  suggest whether it is okay to eat refrozen ice cream.

Can melted ice cream be refrozen?

Although there are many differing opinions on if it is best to refreeze melted ice cream, it all comes down to personal opinion on the taste and texture of that ice cream. If a change in texture does not bother you, then by all means, refreeze to enjoy at another time. If you prefer your ice cream to be in its original texture and not changed, then we recommend that you do not refreeze your ice cream.

How to refreeze ice cream

Should you refreeze melted ice cream?

Another point is that ice cream originally contains fats and some moisture. This is lost as well when the melted ice cream is refrozen. This is because the walls of cells are broken down as a result of when the moisture is lost.

Change in the appearance of ice cream

Change in taste of ice cream

Is it safe to refreeze melted ice cream?

We need to consider the safety aspect when we see whether melting ice cream can be refrozen. When we leave our ice cream at room temperature for a longer period of time that is at a warm temperature then it is not good. This is because leaving the ice cream out for a longer duration of time results in the attack on the ice cream by bacteria. People may think that ice cream may attract bacteria at the time of original freezin,. But it is instantaneously put into the refrigerator. So, it is only when the melted ice cream is kept in warmer temperatures that the growth of bacteria is possible. We may say to eat the ice cream before it melts for that reason.

Specific bacteria like Listeria may grow on the surface of such ice cream. These bacteria generally grow in freezers at the time when melted ice cream is refrozen. Such bacteria are quite bad for your health. People who consume this refrozen ice cream may get severe illnesses.

Coming to the conclusion of this important topic, it is significant to note that we must be cautious about what we are eating. It is our life and it is our decision as to what is to be done with regard to things around us.

It is not just about ice cream, but in general, we must be quite careful when we consume some food items. Ice cream is considered as a dessert to be consumed after the main course of the meal is over, but there are times when this ice cream is left sitting out, while we enjoy our time together. Later on, we may refreeze the ice cream for future use. Just know that the taste and texture of the ice cream can change quite a lot. Please be safe when eating ice cream that has been sitting out for a long period of time and then refrozen. And as always, Have Fun and Be Safe!!