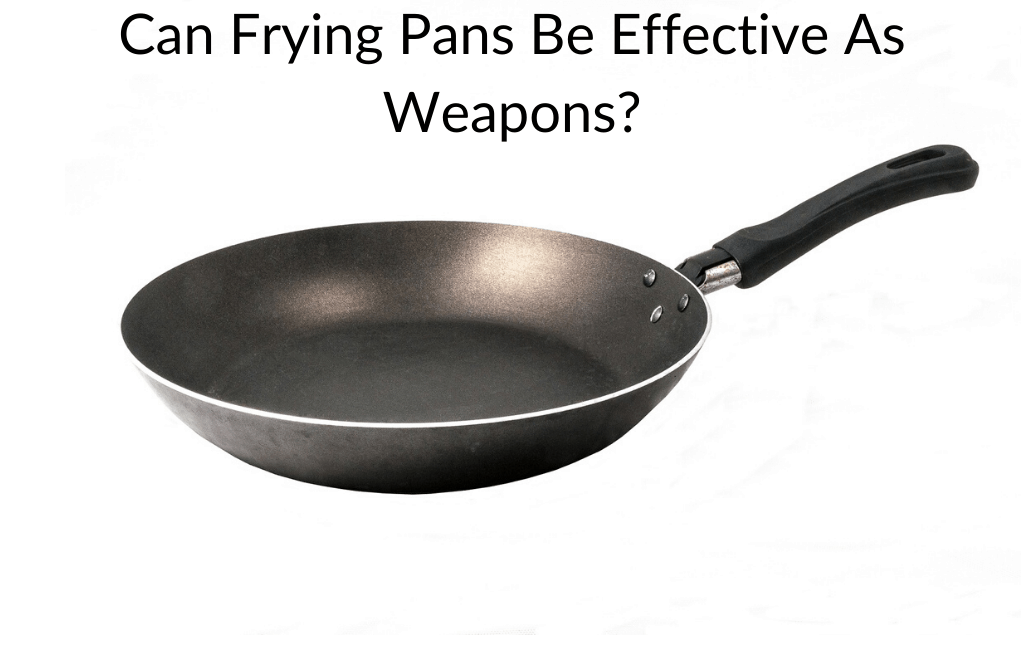 Weapon technology and human evolution have progressed hand in hand since time immemorial. In the prehistoric times, it was the ingenuity of humans that made them the dominant forms of life on planet Earth. First, it was simple stone tools that were used as weapons, like stone axes and chiseled blades.

These designs soon developed into proper weapons as humans learned how to melt metal and shape it into different configurations. The advantages of metalworking were so important to human evolution and our history, that a whole period was named the iron age (500 to 200 BC). Some of the weapons that gained importance and were invented during these times were metal axes, swords, maces and spears. These weapons were effective back then and continue to be effective to this day

Frying pans might seem like a curious anomaly in a conversation about weapons. However, they still hold on to some of the basic aspects of weapons devised in the iron age.

Can frying pans be used as a weapon?

A frying pan can make an effective weapon if need be. While it does not seem particularly dangerous at first glance, if used effectively as the blunt force tool it is, it can deal significant damage. This coupled with the ease of access, would make it an effective tool in a self-defense situation.

The oldest archeological record of frying pans dates back to the Mesopotamian civilization. They used copper, which is a soft and easily moldable metal to create their frying pans. The ancient Egyptians utilized bronze to craft similar frying pans for use in their kitchens.

The modern frying pan is generally a flat-bottomed metal pan with an attached handle. It is typically seven to eleven inches in diameter, has short sides which flare outwards. Frying pans are different from sautéing pans. The key difference is that the sauteing pans have lids and are used to look at lower temperatures.

Before the invention of the modern cooking stove, frying pans had to be used on large open flames, clay ovens and campfires. Owing to the large fires and the heat they generated, frying pans were traditionally made out of cast iron, which is heavy and extremely resilient.

Modern frying pans generally follow the same design as those from ancient civilizations. The key difference comes from the materials used, as they are now commonly made from aluminum and stainless steel. Frying pans can also have special variants like nonstick frying pans which have a thin coating of Teflon.

The Hallmarks Of A Good Weapon

Before we discuss if frying pans make good weapons, it would be helpful to discuss what good weapons have in common.

A good weapon would be one that grants you effective mobility. You should be able to move as effectively with the weapon as you can without the weapon in hand. In the case of a hand to hand weapon, mobility would also refer to your ability to swing a weapon and use it to the greatest possible effect.

A frying pan would rank moderately high on the mobility index. They are not particularly heavy and hence are easy to move with. Frying pans also come with an attached handle, thus making it easy to wield. A frying pan would make an effective weapon from a mobility standpoint. They can be carried around over distances, but the weight combined with the size would pose a challenge.

A frying pan would score decently high in this parameter too. Since the frying pan is only going to be used in a close quarter, hand to hand situation, landing blows with a frying pan is relatively easy. All one has to do is take aim at the intended target, and swing with all their might. The only situation in which accuracy would be affected would be at a range. Throwing a frying pan accurately is harder than it looks! This is due to the unbalanced weight of the pan attached to the handle.

If faced with a situation where your life is at risk, being armed with a weapon that can incapacitate your assailant quickly and effectively is of the utmost importance. A good example would be using an axe or a sword compared to using a stick or a staff. It is going to be much easier to take down an assailant with an axe.

A frying pan would rate moderately high on its takedown potential as well. It is a blunt force weapon that causes damage by sheer virtue of concentrated force. It is not going to be particularly effective if used on the arms or legs of an attacker. However, if used effectively by targeting the head or the neck, the humble frying pan can be a deadly tool.

This is the aspect where the frying pan really shines. Most people would not have access to a gun, or a sword in their house. However, frying pans are an essential component of any kitchen, hence it is easily accessible. If put into a situation where you need a weapon to defend yourself, finding a frying pan to do the job should be relatively easy, especially if you are in your home.

A frying pan can make an effective weapon if need be. While it does not seem particularly dangerous at first glance, if used effectively as the blunt force tool it is, it can deal significant damage. This coupled with the ease of access would make it an effective tool in a self-defense situation. And as always Have Fun and Be Safe!